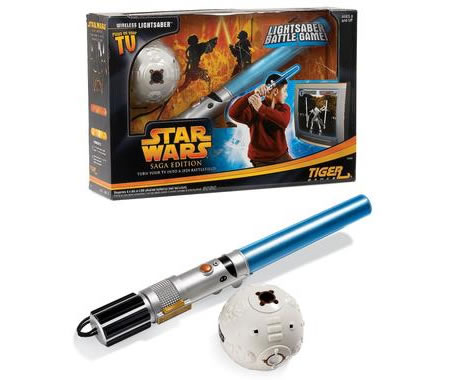 Interactive Star Wars Game- is the force with you?

Star Wars addicts like my editor love to read every gripe associated with the movie. Fresh out to whet their unending appetite (for info and games) is the Interactive Star Wars Game. It simply plugs into a TV and mimics your actual actions onscreen, much like a Wiimote. Use it as an interactive lightsaber to duel with the enemies. A spheroidal training “droid” plugs into the TV via an included RCA cable, thus wirelessly detecting every movement of the lightsaber. You can fight as the famous Jedi Knights such as Obi-Wan Kenobi, Qui-Gon Jinn, and Yoda and battle with a host of adversaries including Jango Fett, Emporer Palpatine, and Darth Vader.

The Interactive Star Wars Game costs $49.95. it will make a good gift for Star Wars addicts this festive season.