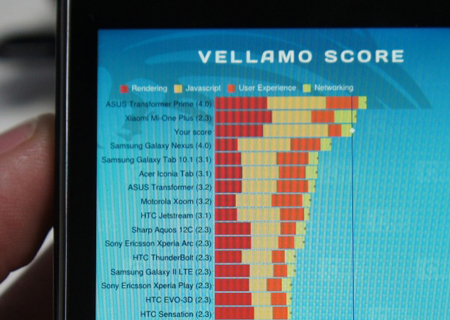 The Medfield platform was much of an object of demand at MWC 2012. With its show by Intel and the promise of the Orange Santa Clara Phone to make it a possible reality, there was much hope rested on the release. Clocking at 1.6GHz, the Intel Atom Z2460 single core processor managed to make headway into our desire, but did it perform as well too? Caschys Blog ran some benchmarking tests on the phone. The results for each component were:
Browser: better than the iPhone 4S, lacking behind the Galaxy Nexus; Vellamo benchmark to test eleven different areas of the device: better than the Samsung Galaxy Nexus, lacking in comparison to the Asus Transformer Prime.

The Orange Santa Clara has prevailed over devices that pack dual-core and quad-core processors. Why not give it the credit in the numbers part of the story and go in for the real big reviews when it’s out for real?
Slashgear