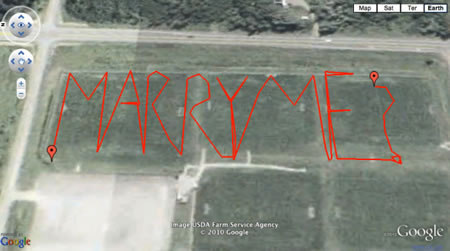 It seems that one US man has literally been running wild for his girlfriend. Wedding photographer Derek Montgomery made extra use of his morning run to spell out a marriage proposal to his girlfriend Kristin Lammi, using Google Maps. The idea to run the question “M-A-R-R-Y-M-E-?” came to him after jogging a slightly haphazard route and noticing that it looked like a letter of the alphabet when viewed on Google. He planned his moves by writing a guide for himself on a piece of a paper, using specific paths that would later become readable letters on the map. Having uploaded the image on Google Maps, he then fashioned a way to propose to Kristin, whom, we can presume, accepted. If you wish to view the proposal, or like Derek’s idea but are too lazy to run a similar route yourself, you can view it on Google Earth. Derek has also recorded the whole long, romantic story on his blog.

Whilst Google may be happy for you to use their Maps for marriage proposals, they cannot guarantee that your girl or boyfriend will accept or that your marriage will be a happy one.
[Bridepop]