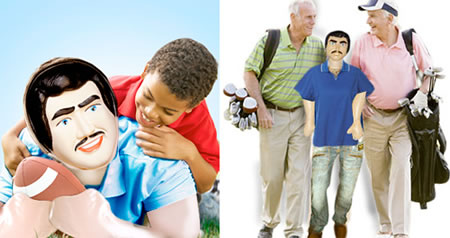 Inflatable sharks for the swimming pool are understandable, but an inflatable dad hits new levels on the weirdness scale. The creative genius at stupid.com describe their dad “John” as the kinda guy who “will always break your falls” – surely he’d pop, no? “He loves to watch the game with you.” Well, at least he won’t shout at the referee. He also enjoys barbecues – can anyone smell burning plastic? “He’s the ultimate man’s man and even quite a ladies’ man as well” although he is non X-rated. Made of vinyl and standing at 60” your inflatable dad is unlikely to beat up the schoolyard bully. In fact, walking about with this guy almost guarantees trouble. You may have to be stupid to buy this inflatable relative. John, the inflatable dad, is available for $17.99 at stupid.com