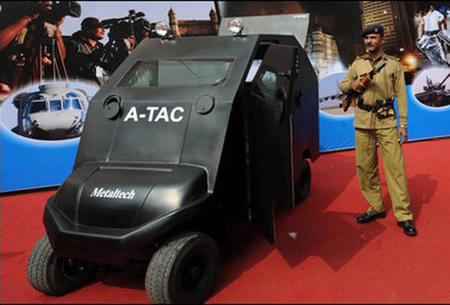 One of the things I’ve always said is that India somehow always manages to get the worst looking cars. Seems like that trend has now made it into the defense arena as well with this, the Anti-Terrorist Assault Cart (ATAC). As if it weren’t bad enough that most of the western world believes we’re country full of Cows and carts, we had to actually name a mini armored (motorized) vehicle a Cart. At the recent Indian arms fair a company called MetalTech showed off their wee little armored vehicle. It’s small and narrow because it’s designed to fit into hotel hallways, stadiums, and other such places with small entrances or passages. As narrow as it appears it can still accommodate two fully-armed personnel. The A-TAC is equipped with bulletproof windows, with four firing ports and runs on a battery pack that can lasts up to six hours. It’s capable of reaching speeds of up to 15MPH. The A-TAC is going to cost about $45,000, that’s pretty steep but you can’t put a price on security, as ugly as it may seem.