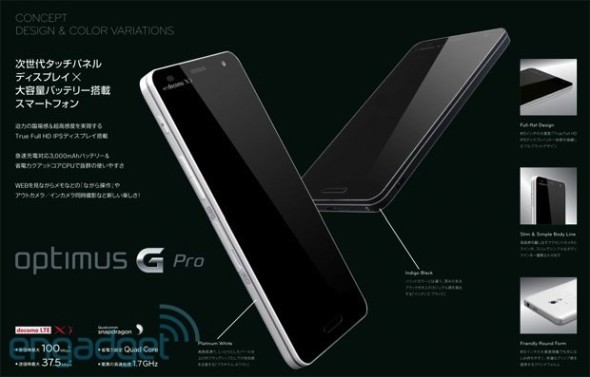 As smartphones these days keep growing larger, electronics manufacturer LG too has in the making a similarly large phone that sticks out of pockets. Leaked images of the said phone called the Optimus G Pro have recently been revealed, displaying a device with a 5-inch 1080p display. Inside, the phone packs a 1.7Ghz Snapdragon S4 Pro APQ8064, 2GB RAM, 32GB Memory, LTE and a 3,000mAh battery!


And from what we’ve noticed in the leaked images, this smartphone is a great looker too and will make most of its competitors look like cheap knick-knacks. Measuring in at 139 x 70 x 10.1mm and weighing 160 grams, this smartphone sports a 13-megapixel rear camera and 2.4-megapixel forward shooter. The phone is also reported to run on the Jelly Bean operating system.