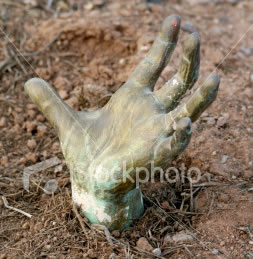 If you’re not DEAD please press the Alarm Button!

How many times have you woken up and thought ‘How I wish I was dead’. And one day you wake up and as usual you’re not dead, but some how there was a glitch and you have been buried alive with full honors and in an ornate casket! Seemingly a funny situation, but in fact this a reality many people have had to live. Why there was a case in India where this bloke was thought for dead, luckily he “awoke” from the dead before they could burn him in his funeral pyre! Taking these random incidents into account, Vitaly Malyukov a Russian inventor has designed caskets outfitted with alarm buttons for those buried alive by mistake. His invention includes a circular device (containing special membranes), which is mounted in a casket. Should a person recover consciousness, he will spot it right away because the device will be glowing red. A person buried alive will have to press that “alarm button” to raise the alarm at a control panel in the office of a cemetery caretaker. The alarm is designed to show which grave have signs of life, so to speak. Earlier reports suggest that people used to put cell phones in the casket with the dearly departed, with the hope that somehow they would come back to life again. But alas the ringing phones in the casket would turn out to be from people who did not know that the subscriber had been dead!

When I’m dead and gone, I sure want to be buried in this casket, just in case!
Via – Fark