Typing through on a virtual keyboard isn’t exactly a swell but that’s a price you pay for portability and touch screen interface. But IBM is patenting its new technology where the touchscreen will be morphed or resized and will also reposition its keys depending on the user’s style. So this way the virtual keyboard will adjust itself to become custom-type and you end up having the keys in the comfortable range thus mitigating chances of errors.

Various parameters would be taken into consideration before the keyboard can adjust to its users like the finger size, length and range of motion. The user will first have to through a series of calibration exercises and depending on the input the system will generate a touch keyboard interface. And it doesn’t end here- after the initial setup, the system would continually monitor usage parameters and integrate the results in the keyboard accordingly.
An illustration in the company’s patent application tells us that it doesn’t really aim at disturbing the QWERTY arrangement, jus that most changes would be subtle and that some keys must be wider than the others. It’s a good innovation in making touchscreen keyboards more convenient but still fails to match up with the tactile feedback of physical keyboards. 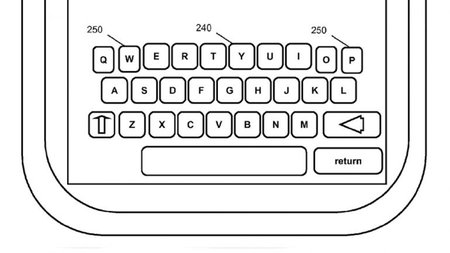