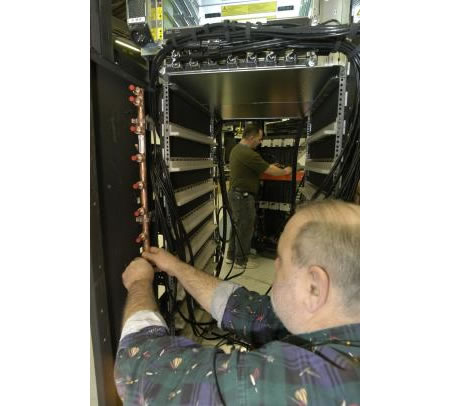 Computer makers have employed liquid cooling in various ways over the decades. We did cover a new computer center in Switzerland that funnels the hot air next door to warm the local swimming pool. Many liquids, and particularly water, can hold far more heat than air. Similarly, architects and building owners are experimenting more with liquid cooling and heating systems as energy prices rise. The effectiveness of a water cooling system, however, depends largely on two parameters: how close you can get the fluid to the hot component and how cool you can get the liquid. In general, the closer the fluid to the chip and cooler the initial temperature, the better it works. IBM’s new supercomputer the Power575 can provide five times the performance of its predecessor on 40 percent of the power. A fully stocked Power 575 rack contains 448 processing cores. A substantial part of the decrease in power consumption is due to a water cooling system that brings in chilled water from the outside, runs it through copper plates located above individual processors to absorb heat, and then draws the water out so it can expel the heat outside of the computer.

IBM is not alone in its pursuit of brining liquid close to the chip. In February, the Tyndall Institute, a government-funded lab and incubator in Ireland, showed us a silicon impeller that can bring cooled liquids in close contact with chips. The impeller measures a few millimeters across. Gamers get your gear water cooled even though some consoles are powering scientific experiments; the sight of a water-cooled computer is too great to be missed.