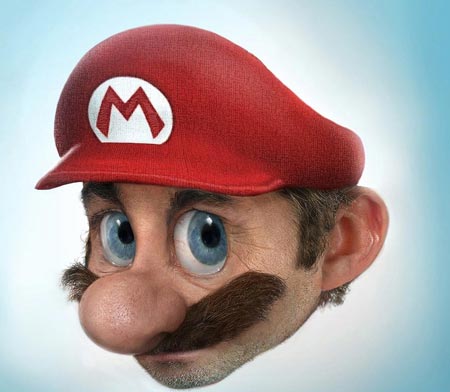 If you thought the human Mario rendering (after the jump) was scary then check out Homer Simpson.
This one was a bit more difficult in that i wanted the light to come in mainly from one side with a bit of back light. So all my reference had to be lit from one side. For textures i needed but didn’t have this lighting situation, i had to darken or light a bit to give the same effect.
For clarification, these aren’t studies of what Homer would look like if he was a real person, its just what a cartoon like Homer would look like if he kept his toon proportions but had realistic texturing and lighting. I find this slightly less disturbing than the Mario one. 🙂 Some might feel he looks too old, keep in mind he was in his 30’s 20 years ago when the show first started. 😉
Created by Pixeloo using Adobe Photoshop CS2 and a bunch of random faces.