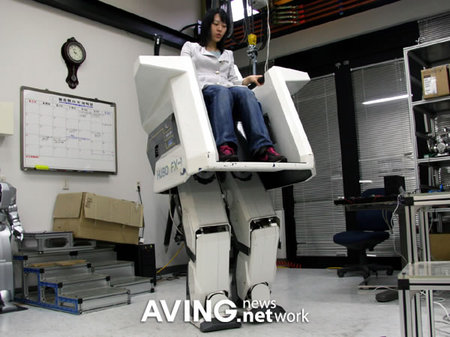 After the Einstein robot KAIST (Korea Advanced Institute of Science and Technology) have developed the Hubo FX-1 chair bot. It is basically a chair with legs and can carry a human weighing upto 100 kgs. The person sitting can control the robot easily using the built in joystick. Each ankle has a 3-axis force/torque sensor which measures the normal force and 2 moments. Each foot has an inclination sensor which measures the angle of the slope. Also, the rate gyro and the inclination sensor of the body allow the device to stabilize itself. HUBO FX-1 is two meters in height, and weighs 150 kg. It requires external power but in the long term KAIST aims to make it battery powered. Future application include carrying old and disabled persons and moving heavy loads. Military is also one of its future applications may be in a decade or so it will be running on fuel cells with a soldier mounted on firing rpg’s and chain guns.