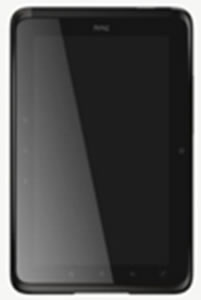 HTC’s Flyer Will Come out in 7 and 10 inch versions, says Leaked Specs

HTC’s Fyler Tablet is scheduled for an official launch in March but meanwhile there isn’t any harm in being amused by some teaser videos or leaked specs. The folks at Electronista have put up an image that doesn’t speak ounces about its feature but just manages to give you a hazy idea as to what the tablet looks like. Rumor mills are saying that Flyer will have specs resembling that of Galaxy Tab and could have LTE 4G support. The display here is going to be 7 inches with 1024×600 resolution and possibly 1GHz Snapdragon processor will be calling the shots in this tablet.

The Android version here is dwindling between 2.2 and 2.3 but we are hoping it crystallizes into tablet-optimised Gingerbread version. There is also going to be a 10-inch version which is all game to complete with the iPad. This one will be featuring LTE 4G and hit the stores in the second half of the year. With both Galaxy S and iPad under its radar, HTC seems have to open up the floodgates of competition here. In just less than two months, we’ll get to see how this works out for Fyler and other tablets.