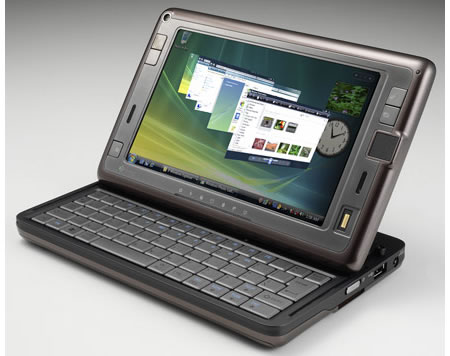 Here is some gossip on the semi-full-featured hybrid tablet ultra-mobile PC from HTC, called the Shift X9000. This is a 1-inch thick, 2 pound device that features a 7-inch touchscreen and Windows Vista Business. According to a Laptop Magazine who reviewed it, the unit has built-in Sprint EVDO connectivity and push email. Apparently there are several hard-wired buttons to the right of the screen for activating Bluetooth, WiFi, and EVDO. There is a button for changing between the devices two resolutions – 1024 by 600 and 800 by 480. It also has a built-in 1-megapixel webcam, touchpad, fingerprint scanner, two vertically organized mouse buttons, and a SnapVue button, which allows users to check email even if the device is off. It uses Origami 2.0 for web browsing and media management, plus Internet Explorer is also onboard.