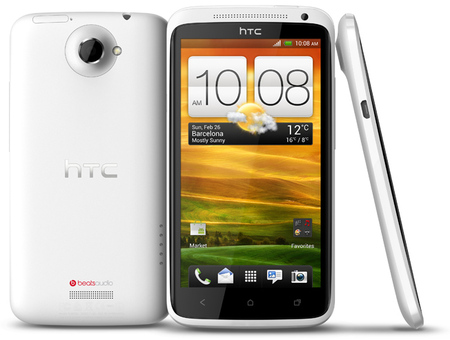 HTC One X is official

HTC One X is not just an Android smartphone. The flagship handset is hailed to be a monster owing to the stupendous combination of specs the makers have put together here. Packed with a Tegra 3 quadcore+1 processor, the phone also boasts of 4.7-inch 1280 x 720 Super-LCD display, an 8MP camera, 1GB RAM, 32GB of internal storage, Android 4.0 and a front-facing 1.3MP camera with 720p video support. It has pocket-dominating measurements of 134.36 x 69.9 x 8.9 mm and comes fitted in a a polycarbonate chassis with microdrilled speaker holes.

The camera capabilities here worth a mention owing to the Backside-Illuminated sensor, an f2.0 lens for better low-light performance and an LED flash. Besides, there is also a custom HTC Image Chip to perform processing. The camera also loads faster – 0.7s – and takes shots on just 0.2s. There is support for burst-photography imply by holding down the still button, as well as simultaneous still photo and 1080p Full HD video capture. The LED flash too displays impressive functions by intelligently choosing from seven brightness levels, depending on the closeness of the subject. With regards to pricing and availability, HTC says this should be out in the next sixty days and will be AT&T exclusive in the US. Pricing still bears a TBA status but experts are putting this one in the $200-$300 category.
[Giz]