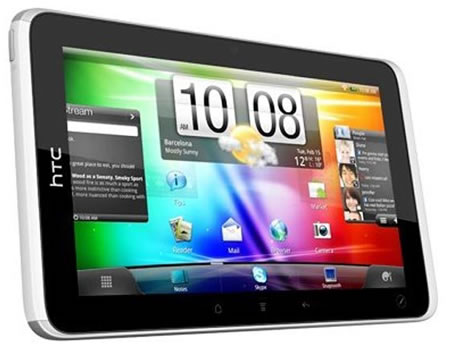 HTC has finally stepped into the tablet battlefield with its first Android tablet called HTC flyer. I do see people getting little tired of the tablet hype but there isn’t really any rest for our global tech big wigs. This tablet has been a constant subject of several rumors and leaks, and its official spec sheet does confirm a majority of them. Below its 7-inch display, the device packs in a powerful 1.5Ghz Snapdragon CPU, 32 GB of storage and support for a plethora of audio and video formats. Driven by Android with HTC Sense, the tablet has two cameras, one being a rear-facing 5MP camera with auto focus and 1.3MP front camera for video calls. It also comes with a stylus which isn’t an industry standard but HTC justifies it use for its new Scribe application that lets you write and doodle. It is expected to hit the stores in Q2 with an unannounced pricing and carrier info.
[MobileCrunch]