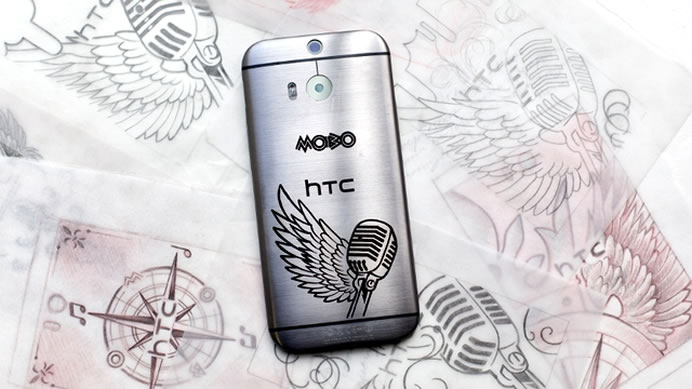 If you are a Black Music Fan, and like Tattoos, then HTC has a smartphone especially for you. HTC has produced limited edition HTC One (M8) limited edition handset in gun metal colour with a tattoo on the back to commemorate this year’s MOBO (Music Of Black Origin) Awards. The tattoo has been designed by very renowned and famous artists, Lal Hardy and Cally Jo. The tattoo has a black coloured 1950s style microphone and angel wings, also there’s the MOBO Logo in the centre. Lal Hardy said “The 1950s style microphone has been carved to depict the history of MOBO awards and the angel wings shows freedom. The design of the tattoo shows the influence of Black Music and MOBO on artists and people all over the world and the wings show freedom through connectivity which is the core of HTC. The inspiration of the tattoo artists Lal Hardy and Cally Jo were the influential musicians and musical genres of the previous decades.

HTC One (M8) has won several awards this year for being the Best Phone of 2014, so it was the right choice to be given to the hottest artists of the music industry. Not just artists at MOBO but if you are lucky, you can also win an HTC One (M8). Just keep track of HTC’s UK Twitter and Facebook feeds to know when the competition opens.