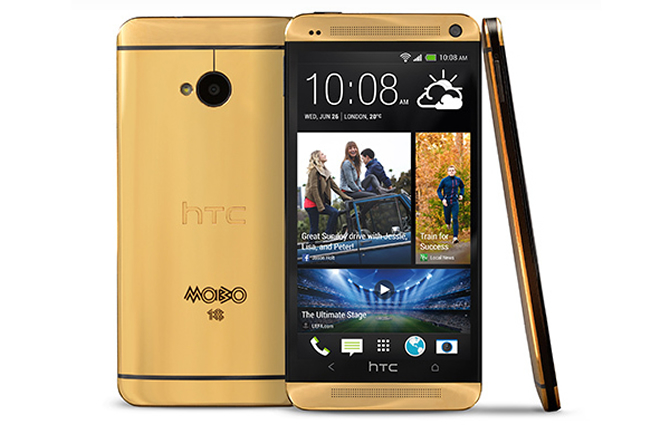 Do people really buy these uber-luxury expensive phones? I wonder if they do so and then invest in an equally expansive security setup to protect them. Well, for once, we have a phone that has won its accolades and built a mighty reputation. The HTC One rolls in, dressed all in gold and with a price tag that could well get you a lot more, across the globe. We have seen Samsung and Apple roll out the gold versions of the flagship offerings but with Mr. Tony Stark in tow, pimping up and blinging up devices would never really be a problem for HTC. In fact, this one should have come in true Iron Man colors to be the real deal. Instead, the Taiwanese manufacturer produced five 18-carat gold One smartphones to celebrate the 18th anniversary of the MOBO Awards, which is a British awards ceremony celebrating “music of black origin.”


Goldgenie, a gold customizing company has partnered with the manufacturer to roll out this version of the phone. It is available at £2,750 (roughly $4,420) though it will will not be on general sale. These prestigious peices apart, a 24-carat edition of the HTC can be purchased at$3,000 from Goldgenie.