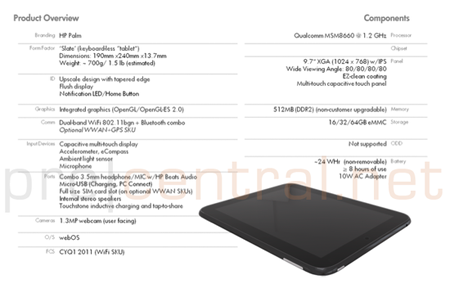 HP Tablet will be called Touchpad

We’re wondering how many prefixes can you add to the word ‘pad’ to name your company’s tablet. There’s already the ‘i’, ‘idea’, ‘olive’ among some leading global names. It’s only Samsung who decided to baptize theirs as ‘Tab’ instead. However, from a leaked conversion (our way of addressing ‘eavesdropping’), we got to know that the folks at BoyGeniusReport picked up vital signals from HP’s media event. It seems that there was some talk of one ‘Touchpad’ device, which we’re all quite convinced of being HP’s long awaited tablet. Besides the name, there was also talk of the gizmo weighing 1.5 pounds and being 13mm thick.

There’s sure to be more news of the Tablet to be kicking in tomorrow. We are dying to pick some of the early specs that we already know of, like the 9.7-inch screen, 512MB DDR2 RAM, Wi-Fi, webOS and more.
BGR