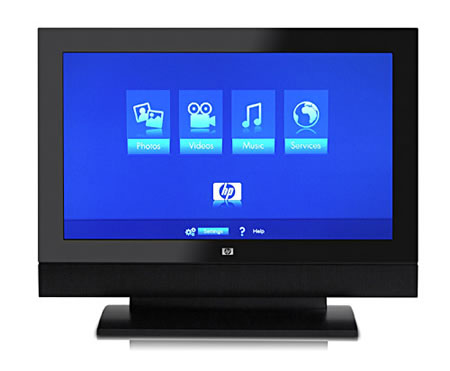 Another baby has made entry into HP’s bandwagon of media centered gizmos. The SLC3760N is HP’s 37-inch LCD HDTV. It includes wired and wireless connections. The $2,199 worth of LCD will make fade away the appeal of every LCD you’ve ever come across. With a gorgeous innovative flat panel, this hi-definition consumer TV of its size to offer an integrated 802.11 a/b/g Wi-Fi radio along with standard Ethernet network connections. display only contains a Wi-Fi radio and not a full-fledged router, so users will have to own another Wi-Fi connected device to allow it access to pre-recorded content.The MediaSmart display would allow you to lay your eager hands music, pictures and video residing on computer hard drives via wired or wireless network. plus HDMI out for connecting directly to stereos and home theater receivers. The MediaSmart is also a full-fledged HDTV boasting a resolution of 1366 by 768 capable of displaying hi-def programming in luscious 720p.

You also get a remote and built-in HDTV tuner. Even more appealing, according to HP, the TV will natively support DivX movies along with a long line of other widely-used video file formats. It has already hit the retail shelves so don’t you be late in getting one for yourself…
Source