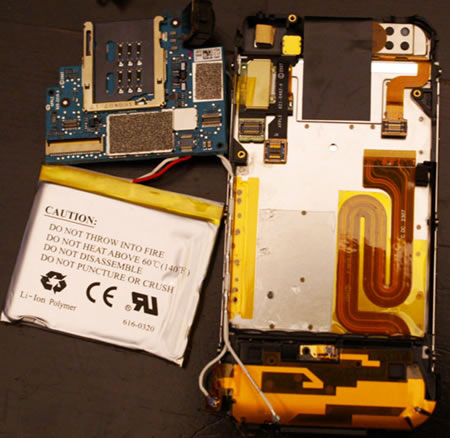 Portelligent estimates that the new smartphone costs Apple a mere $220 to make. Read on the figure out how. Apple has divulged very little about its supply-chain and manufacturing arrangements. The only visible details are Intel the chipmaker, NVIDA and ATI, which supply the graphics chips for computers. So Austin-based Portelligent, which is a teardown firm, breaks the code to discover who supplies all the parts but what it costs to make a device. Here the CEO David Carey takes apart the iPhone. Apparently the cost of the materials used in the iPhone adds up to about $200 for the 4-gigabyte version (it sells for $499) and about $220 for the 8-gigabyte version (it sells for $599). This estimate doesn’t include costs of final assembly. The most expensive component on the phone is the touch screen, for which Apple sourced German company Balda. The touch screen costs around $60 per unit.

Samsung has supplied the main microprocessor chip. The serial number stamped with Apple Logo matches closely with the chip that Samsung sells. Samsung also supplied the NAND-type flash memory that stores data on the phone, including songs, video, and pictures.
Source
Image via Anandtech