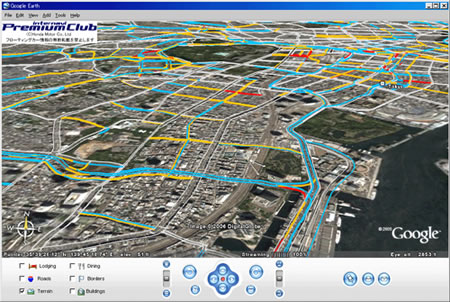 Earlier we had reported on Google and Volkswagen teaming up to develop navigation system. Honda’s “InterNavi Floating Car System,” a telematics service currently provided for the company’s “InterNavi Premium Club” members, collected data of total 100 million kilometers, which is equivalent to approximately 2,500 round trips around the globe, in mid March 2006. The Floating Car System achieved this in about 2 years and a half since its commercial start. Honda also started providing the system’s traffic data using “Google Earth” on March 29, 2006.

The InterNavi Floating Car System transmits traveling time data of an area, where an InterNavi Premium Club member vehicle has driven, to the center, so the members can mutually utilize the accumulated information at the center. According to the company, the “InterNavi VICS (vehicle information and communication system),” which delivers Floating Car data along with regular VICS information, can cover road data of up to 330,000 km.
Members can acquire traffic data through Google Earth by accessing the InterNavi Premium Club’s website using their computers with Google Earth installed. Flexible browsing such as 3D and tilted view, for example, is available. Traffic information is displayed in three colors indicating “smooth (blue),” “busy (orange)” and “congested (red).” Initial service area only extends to 20 km around the center of Tokyo, Nagoya and Osaka, but the coverage will expand nationwide.
Source