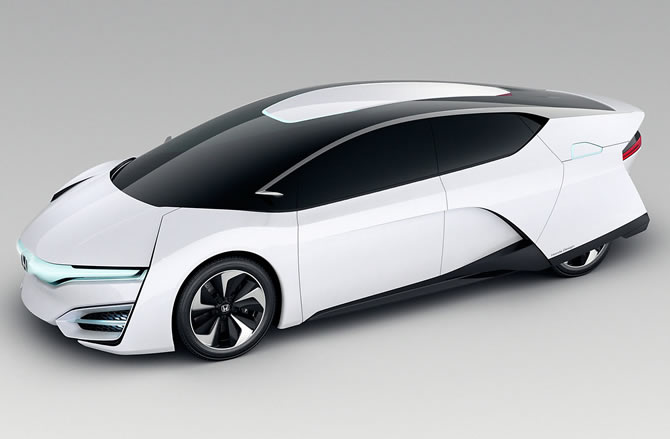 Remember the Honda FCX Clarity? The hydrogen fuel-cell powered vehicle created ripples in the motoring world when it was first introduced back in 2008. But it suffered from its own share of issues and thanks to massive the improvements in electric vehicle technology over the past years, hydrogen fuel-cell technology which was once considered a game changer has been pushed to the backburner. But two of the Japan’s biggest automakers, Honda and Toyota, want us to believe the technology is anything but dead. At this year’s Los Angeles Motor Show, Honda Motor Co Ltd has unveiled a successor to the FCX Clarity named the ‘FCEV (fuel cell-electric vehicle) Concept’. The design might loosely resemble the Volkswagen XL1 but underneath the shell, the technology is entirely different, and quite impressive we must say!

The five-seater concept is a huge improvement from its predecessor and also is the first car to feature a fuel-cell powertrain that is completely packaged in the engine bay which, according to Honda, will enable designers to create all the future fuel cell vehicles with spacious interiors. Honda has been able to achieve 33 per cent reduction in stack size of the fuel-cell compared to the FCX Clarity of and more than 60 per cent increase in power density with a staggering power output of 160kW. The Japanese automaker claims the FCEV Concept will deliver a driving range of more than 482km (300 miles) and offer three-minute refueling time. That’s comparable to normal gasoline powered cars. Honda has also announced that they’ll launch the production version of the FCEV by 2015 in Japan and the USA, but considering that there are still 15 hydrogen filling stations in the United States, the infrastructure still doesn’t back such projects.