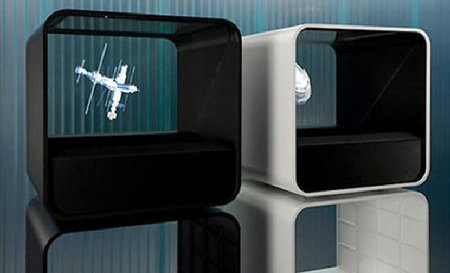 CNN tried to show off the 3D Holographic representation of the reporters in the Election coverage, but the technology was nowhere near 3D since the reporters were unable to look at each other. Nevertheless, a European manufacturer Holocube, has created a stylish box capable of displaying single objects in 3D. ‘Holocube 3D Projection Box’. It sports an integrated HDD that stores video and uses it to create 3D Holograms at a resolution of 1080i.It’s available in 10-inch, 15-inch, or 17-inch models, with a 40GB hard drive. However if this technology catches on then there will be a public outcry at the need to look for the old cupboards we threw out when switching from CRTs to LCDs.

The Holocube costs approx $9000 and can store up to 18-hours of compressed video at 4Mb/s on its 40GB hard drive, which can then be converted into a 3D hologram. The display’s brightness rating is 1100cd/m², and a USB port is built-in for uploading fresh content. You also get an optional floor stand for easy transportation.
Gearcrave