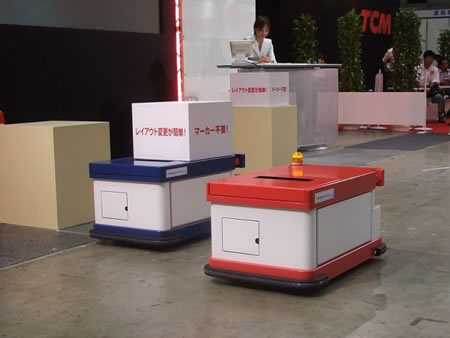 It was just a couple days ago when we saw the Japanese ‘Core’ robot that was all legs and no head that was designed to haul heavy loads. This new one looks a lot less ’humanoid’ or headless but is also designed to carry stuff around. Hitachi is the designer of this bot dubbed ‘Intelligent Carry’. It’s designed to get around easily, as large as it is and perform simple chores autonomously. The company is using an algorithm called “SLAM” (Simultaneous Localization and Mapping), that they’ve designed themselves to do just what the acronym says. Oddly though, a German company has designed the laser measurement sensor (that for some strange reason is called SICK) that detects obstacles in the robot’s path. This bot is not designed for your home though but rather semiconductor makers, food companies and medical firms.
Crunchgear