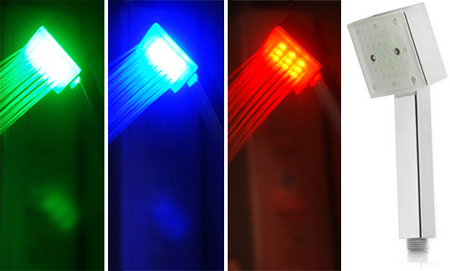 Have a psychedelic shower with Hydro-powered shower head

Why refrain from making that relaxing shower any less fun, especially after a dull day at work? Color fulfills your grey life, especially if it means you’re basking in naked glory before it, tempered water splashing down your weary face. That’s the unique pleasure that the LED color changing shower heads can give you. There’s much said about chroma-therapy for me to get started on the possible benefits of this shower head. What’s really amazing is that the color of the head depends on the temperature of the water flowing out of it. Green indicates under 91F while red shows up if your water temperature exceeds 107F. Blue takes up a share of the middle. The system has an internal generator that generates power to light up the LEDs.

All the awesomeness comes for a mere $13. So summers will see a lot of green; autumn a lot of blue; and winters, some steamy red. If you exceed 114F, then the shower will blink red.
OhGizmo