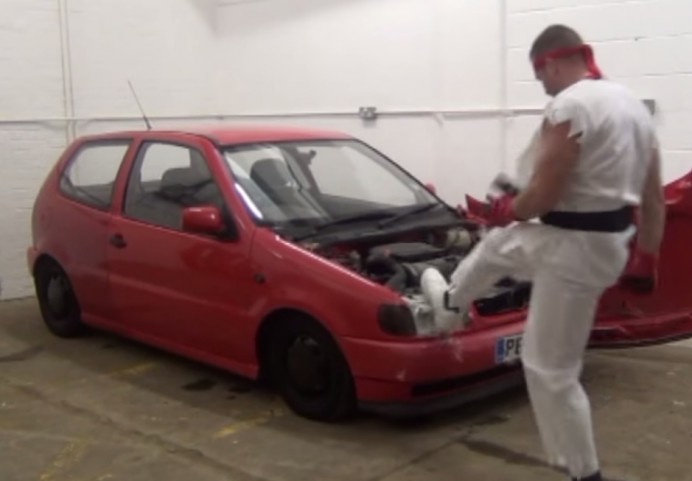 Have you ever had those moments of pure rage where you feel like throwing something against a wall so that its destruction would help alleviate some of your pent up stress? Or have you ever just played too much Street Fighter, to the extent that the all encompassing need to dress up as a character and totally decimate your car is just too overwhelming to ignore? In regards to the latter, Street Fighter’s Bonus car destruction round has been the inspiration for many fans across the globe and although, thanks to the YouTube generation, we know of more of them, I’m sure the practice of reigning destruction down on unsuspecting vehicles has been going on since the first truly hardcore gamer wrecked havoc on his first 8 bit Street Fighter game car!

It was only recently there have been a couple of videos that surfaced on YouTube and other video channels showing guys going completely ape on small cars. Much like their “heroes” in the Street Fighter games, these individuals, although seemingly very capable martial arts experts (so kids do not try this at home), took out, what seems like an immeasurable amount of frustration on their vehicles. One gent decided to do it in the privacy of own garage with multiple running cameras and the other was done in front of a live audience on some sort of South Korean game show. Both equally vicious, vivid, vehement acts of vehicular violence are enough to make fans of Pixar’s Cars movies take up arms in protest of such motor mayhem!