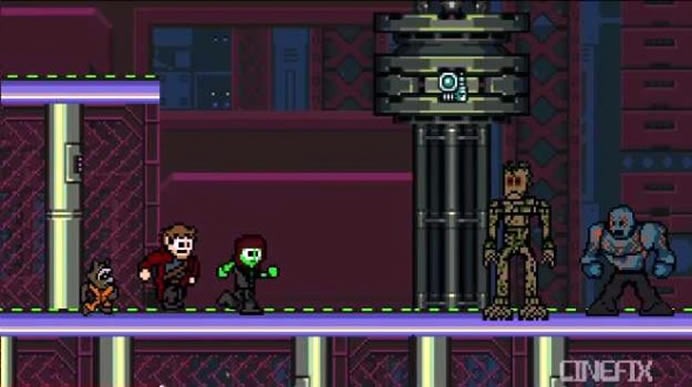 Guardians of the Galaxy Goes 8 Bit; Looks and Sounds Totally Awesome in its Retro-Remake

Aside from the movie being a visual extravaganza with high-paced, action packed sequences dabbed carefully with brilliant humor, the thing that really resonated with me was Peter Quill’ (Star Lord) quips and ever so frequent connections to retro, 1980’s ideologies. And seeing as that was just about the coolest era there was, Cinefix decided that they should do something about making the GOTG movie much more interesting. So putting in their best programmers and developers on it, the company has released a trailer of what the movie would have looked like, were it a 1980’s 8 Bit video game. The results are pure awesomeness!

Don’t believe me? Take a look at the video below and make up your own mind. –

In all its pixilated glory reminiscent of retro console games, the GOTG franchise just cashed in on a segment that is sure to excite the children of the 80’s and gamers like. The trailer highlights a variety of scenes from Marvel’s blockbuster in an 8 Bit format and showcases the characters functioning in that realm making all the action packed sequences from the movie look like an old school video game. Even the soundtrack has been toned perfectly to suit the format and favorites like “Hooked on a Feeling” by Blue Swede, “Come and Get Your Love” by Redbone, and others sound great and very nostalgic. Gamers who grew up with retro consoles like the NES will find this even more entertaining than the rest of the world. That being said, I have a feeling even noobs will find something to appreciate here.