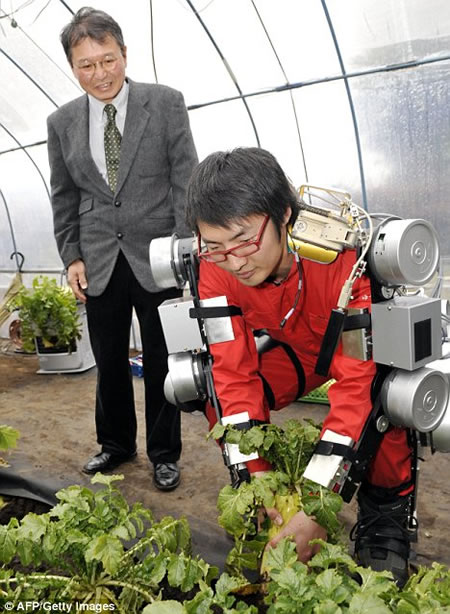 Green Thumb Robot can give you a bad back, helps weed gardens although

The suit weighs 55lb, that’s good enough as 25 bags of sugar and has been invented by the Tokyo University of Agriculture and Technology. Although the makers of this robot insist that ‘suit’ carries its own weight and places a minimum load on the operator, the look of it describes something else! The thing uses eight motors and 16 sensors and what it does is pull out is weeds and pick oranges! Perpetrated as an aid to aging farmers who have leg muscles and joint problems, the robot promises to haul them up effortlessly. Expected to cost between £3,500 ($5000) and £7,000 ($10,000), the design costs plenty of an ordinary farmer!

‘Human robotic technology is being applied to various industries but it has great potential in the agricultural industry, in which people have to bear a heavy burden,’ Professor Shigeki Toyama said. ‘That’s especially obvious in Japan, where the industry is rapidly ageing and its population is shrinking,’ he said.