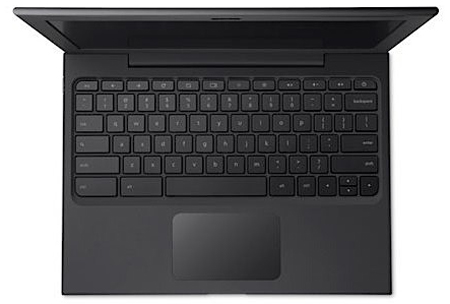 Just a little earlier we mentioned the CR-48 as being Google’s unbranded little device that would carry the Chrome OS out to the community looking run tests and experiences with search giant’s latest venture. This laptop will be Google’s medium through which it will initially offer its Chrome OS Pilot Program, in a sort of public beta form. To reiterate you’ll first need to apply via the website here and Google is also planning on having a variety of promos to get people interested in the device and give it to users to get feedback. The specs of this device are as follows – the CR-48 will come with a 1.1-inch screen a full sized QWERTY keyboard and a large clickpad. The weird part about the keypad is that it apparently comes sans function keys but does feature a full row of Apple Keyboard-style actions. Also instead of a Caps Lock you’ve got a search button.

This mysterious CR-48 laptop will run on a Qualcomm Gobi 3G chip for Verizon data in the US and be open to all other carriers the world over. It’s Wi-Fi enabled and features a web cam and Flash storage. They’re also claiming 8+ hours of active use and 8+ days of standby. There’s no mention yet of pricing or who the manufacture of the device is, but I’m sure that’ll come to light soon enough.
Engadget