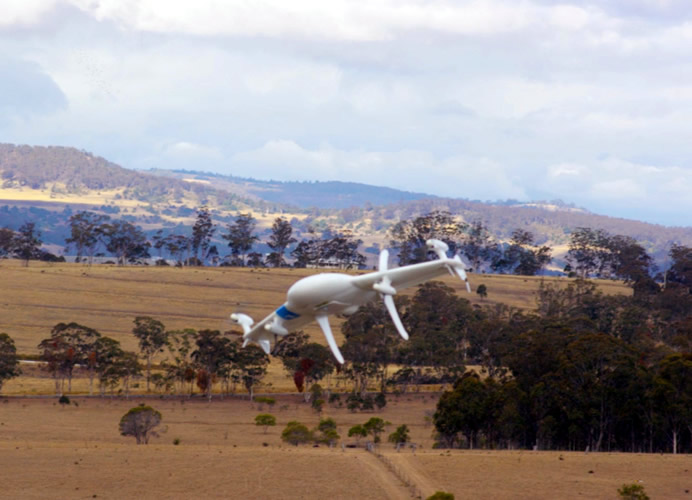 Google’s been known to make our lives easier by their constant innovations. After inventing self-driving cars, Google glass (wearable ubiquitous computer) and Google contact lenses (for diabetics to constantly monitor their glucose levels from their tears), the king of the web has come up with yet another piece of machinery that can revolutionize the transportation of goods ordered from online portals. Google’s semi-secret facility based in Mountain View, California latest project “Project Wing” is testing a small aircraft, 5 feet wide and 2 and half feet high which can deliver goods to you within a few minutes of your order!

These unmanned drones can deliver stuff within a 10 mile radius of its warehouses and can reach the customer in as little time as 2 minutes. The prototype also called the “tail sitter” has four propellers which move in different directions in the different stages of the flight. The self-flying aircraft will be able to fly horizontally as well as vertically, will carry packages in the gap located in the middle of the wings. The package will attached to a little gadget called the “egg”, which will detect when the package has reached the ground and signal that it should go back to the UAV (Unmanned Aerial Vehicle). The UAV weighs about 19 pounds and will be capable of attaining a speed of up to 90 km/hr.

Initially drones were conceived for delivering defibrillator kits to people suspected of having heart attacks, so as to beat the traffic on the roads. Google also stated that, in future drones could also be used to provide disaster relief in remote areas which are hit by natural calamities.

The device has been tested in Australia because flying drones is restricted in most other countries. The drone has successfully delivered supplies including candy bars, dog treats, cattle vaccines, water and radio to two farmers in Queensland, Australia. The project has been kept under wraps for the past two years and about 30 tests have been conducted in Australia till Mid-August.

However, this is not an entirely new concept as Google’s fierce competitor Amazon has also tested a similar drone for delivering its products called Octocopter. They tested drones back in 2013 which can deliver a parcel weighing up to 2.3 kgs but have failed to get permission to start the services from the US FAA (Federal Aviation Administration). The FAA has approved the drones for public safety, police and government agencies. But will it permit the commercial use of drones? Will drones in the air become a normal sight like mail trucks we see on the roads today? Only FAA can tell!