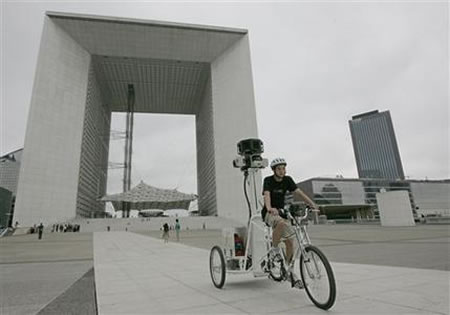 Google is the best thing that has happened to human kind and there is very little doubt about it. It is not just because they are perpetually clearing your doubts and questions on almost everything under the sky, but also because they are always on their toes to update their services. To offer 360-degree images of places that were inaccessible before, Google has hired two young cyclists to ride through gardens, historical sites and pedestrian. This is an effort made to offer three-dimensional photos to Google’s Street View Maps. The cyclists are now in Paris wearing Google T-shirts and white helmets n a three-wheeler with a long pole holding nine cameras, a GPS, a computer and a generator.

These cyclists will be visiting Parisian sites including the Chateau de Versailles, west of Paris, the Jardin du Luxembourg on the city’s Left Bank until August 20 and will then go to the north of the country and in the fall they will go south. The idea is to add new photos to their Street View option in all French cities that will provide tourists a view of the place they are going to visit.
[Physorg]