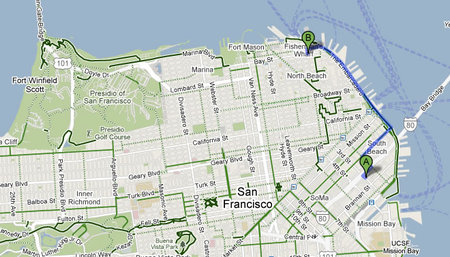 Cyclists have something to look forward to now, in addition to their silly little GPS systems. The all new addition to Google Maps will help them go on to explore some cyclist friendly ends of town. Though this doesn’t really work everywhere, there have been some good results that could help those living in San Francisco. People living in other parts of the States have to try and figure how good it’s going for them or if it’s going for them at all. The whole thing’s still in its early testing days, more lovingly known as ‘beta’.

Cycling has taken a lot of pollution and obesity out of our land and there’s little doubt why Google seem to have given it so much of impetus in one of their most used technologies.
[Wired]