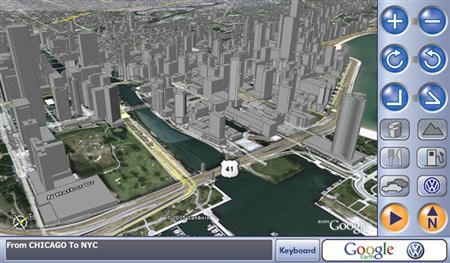 Google and Volkswagen team up to develop navigation system

Google and Volkswagen of America are developing an in-car navigation system that displays a bird’s eye view of the road ahead instead of line drawings found in current systems. The two companies are working with nVidia who will be powering the three-dimensional display so passengers can see pictures of the stores, houses and office buildings they pass en route to a particular location. Google would provide the search engine for retrieving information from the Web to overlay on the photos, Stoschek said. Using the system’s touch screen, a driver could search for the closest gas station, for example, and get back a list of several on a photo of the surrounding area, along with the price of gasoline at the different locations.