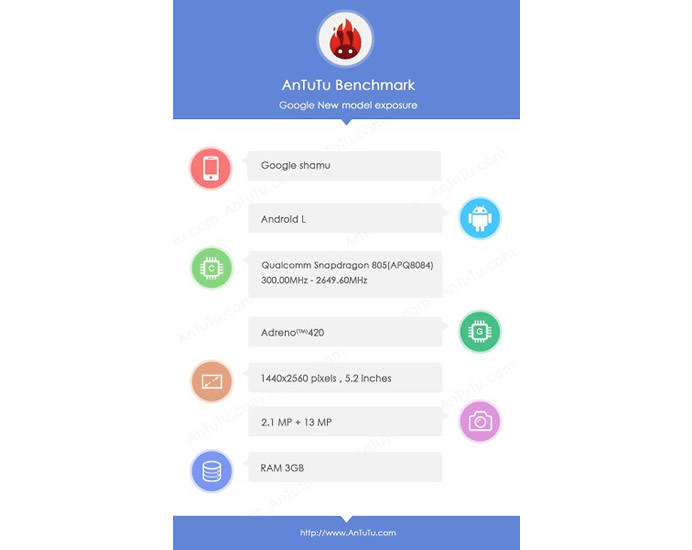 Earlier we have heard rumours that Google and Motorola have collaborated to make a new smartphone which might be a new addition to the Nexus series called Nexus 6. Following the convention of giving the name of water creatures to its device, Google has given the codename Motorola Shamu to this device, Shamu meaning killer whale. It seems the whispers were true as the specs of the smartphone have been leaked on the AnTuTu and GFX benchmark tests.

According to the benchmark tests, the Nexus 6 will be powered by the latest from Qualcomm, a Snapdragon 805 processor running at quad-core 2.65 GHz, Adreno 420 GPU and 3GB RAM for a speedy performance.

The display is 5.2”QHD, has a resolution of 1,440*2,650 pixels which translates to a pixel density of 564 ppi, for an eye popping picture quality. Nexus 6 will come with an impressive rear camera of 13 Megapixels and a front camera of 2.1 Megapixels. The device will run on the new Android L.

With killer hardware like this, Nexus 6 will be ahead in comparison to current flagship phones like Samsung Galaxy S5, Sony Xperia Z2, and HTC One (M8). Whether it will have a competitive price also, we will come to know.
The Nexus 6 launch date is unavailable as of now, but it is being speculated that we might see a release in Fall 2014.