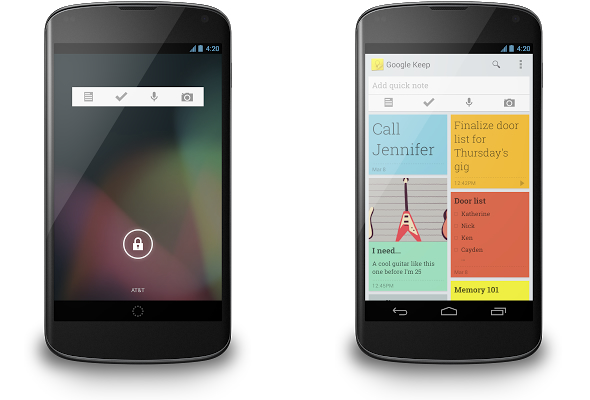 Struggling to find space to stick your next sticky note? Love the cool things you come across everyday but fail to record it someplace to revisit it later? Or just a little amnesiac like me, Google has come up with some help. ‘Google Keep’ is an App that lets you jot down all your ideas as and when it comes, create check-lists, make virtual sticky notes, record voice-memos and take photos to keep a visual memory. But why Google Keep? There are a plethora of options when it comes to similar apps available for smartphones, Evernote – the king of the arena which is widely used in the corporate world and even has some ebooks written around it, and then there are some incredibly simple ones like Notes.


Well, there are a few things that work in favour of this app. It has a ridiculously simple UI, all the files are stored in Google Drive which can be synced seamlessly with other devices. The Keep Widget comes in pretty handy and to top it all, it has a lock-screen widget for devices running on Android 4.2+.