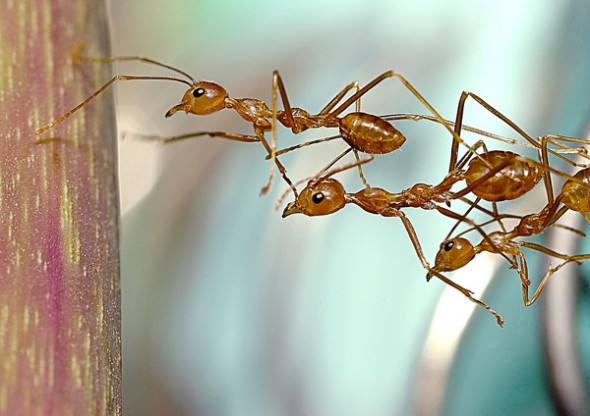 How do you make already cool Google Glass even more kick-ass? Give it games! It’s still some time before eyewear will hit the markets but developers tinkering with the explorers’ edition have already started to add some real sweet arsenal to it. Two developers from the US, Daniel Estrada who is a philosophy professor at Illinois State University and Jonathan Lawhead of Columbia University, are developing an Alternate-Reality-Game (ARG) for Google Glass. ARG games can be real fun and Ingress is a fine example for it. The duo has conceptualized the game on ants and their behavior in a swarm. The game will be Mass Multiplayer Online (MMO) and will have open source license.


Without having to carry the device in the hands for an ARG game, the Google Glass worn as an eyewear will track the users’ routes and color mark it on map cards. Like ants, Google Glass users from the same colony will have to tread the same path without physically communicating with each other to collect points. Crossing the tracks of rival colonies will set back the user with a day’s work. It will not track one single user and barge into privacy but track collectively marking a digital route. Sounds cool! Some news of other games like Space invaders being developed for Google Glass also came in today. The question is will Google Glass emerge as a leading gamers’ device? Only time will tell. Check out the video uploaded by the developer duo for Swarms’ fund raising pitch in which they explain the concept of the game.