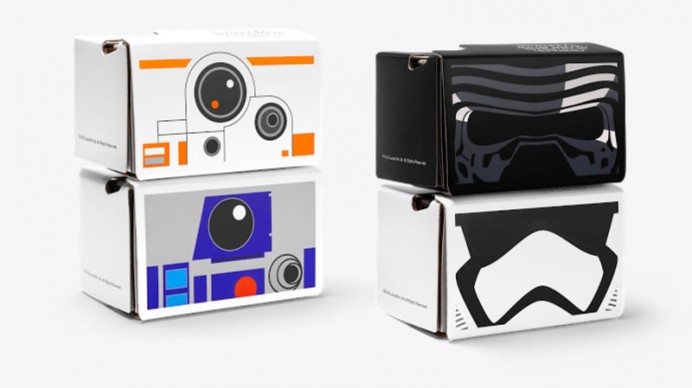 And just when we were beginning to imagine that Star Wars merchandising wouldn’t leap ahead of the current generation of fancy lightsabers, action figures, helmets and costumes; Google has come up with yet another geek-treat, a limited edition Star Wars Google Cardboard! For the uninitiated, the Google Cardboard is a virtual reality viewer made out of cardboard. To use one of these, all you need to do is attach a smartphone and leap into DIY VR awesomeness! The Google Cardboard is extremely easy to assemble and takes just three simple steps.

The limited edition Star Wars Google Cardboard VR headsets come with designs inspired by BB-8, First Order Stormtrooper, Kylo Ren, and R2-D2. Also, the most amazing part of this deal is the fact that Google will be shipping these free to fans! Each fan gets one headset from Google, in celebration of the Star Wars: The Force Awakens movie. Google will also pay for the shipping of these headsets. To be eligible to have one of these, a user must be a United States resident with a United States shipping address as well as an active Google Wallet account. We can’t stop wishing that Google brought these awesome Star Wars inspired freebies to European, Asian and African shores too!