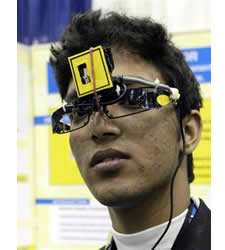 Glabenator a blessing for paralysis victims

ISEF-International Science and Engineering Fair, is the world’s largest pre-college scientific research-based competition that draws 1400 participants from across the world.. Apurv Mishra was selected for his invention “Glabenator” – an advanced alternative and augmentative communication device. He was given the national award and an Ipod by Intel chief Franklin Jones. The “Glabenator” is a communication system for the physically-challenged and quadriplegic. Apurv has thought of a way to help people suffering from paralysis to communicate through simple movements of just two muscles in their forehead. Through this, a patient who has lost the power to move most of his body, can scroll a set menu and select standard lines that will be voiced through a recorder and speaker. Glabenator derives its name from the word Glabella, which is a name for forehead muscles. Mishra’s invention uses movements of the forehead to control a computer allowing those suffering from paralysis a way to communicate.
Thanks Deepa

Severe or complete loss of motor function in all four limbs which may result from brain diseases; spinal cord diseases; peripheral nervous system diseases; neuromuscular diseases; or rarely muscular diseases. Consciousness is spared and the only retained voluntary motor activity may be limited eye movements. “Glabenator” can be used for operating a computer and other sophisticated devices by taking signal from the contraction muscles above the eyebrows.
Apurv says his invention would cost less than Rs 1500 ($ 35) and has wide-ranging possibilities as it can be used as an augmentative tool by pilots handling ordinary or combat aircrafts.