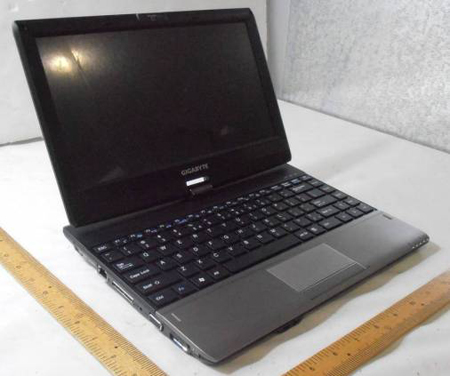 What would you give if you could have the magic of three worlds in one? The Gigabyte T1132 is a hybrid combination of a laptop, tablet and desktop. It has a basic notebook form with a screen that can fold back to serve as a tablet. Then you can go on to close the lid and add the Booktop 1132 with a monitor, keyboard and mouse to have a desktop system, right there. The specifications include a 11.6-inch display screen, an Intel Core i5 processor, Nvidia GeForce GT520M graphics with 1GB memory, two DDR3 slots, stereo speakers and two woofers, Bluetooth, Wi-Fi, Bluetooth 3.0, card reader, a 1.3-megapixel camera, HDMI port and optional 3D.

The Gigabyte T1132 showed up at FCC. There’s no word about the pricing and availability as yet.
Liliputing