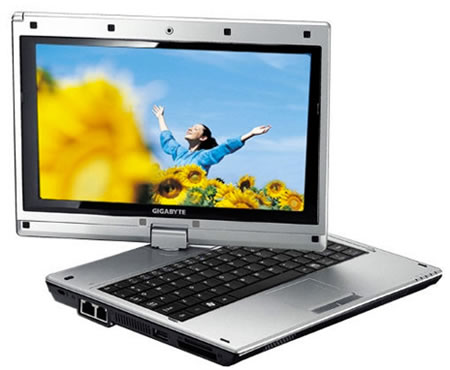 Gigabyte M912 mini note stands out with its tablet design

Gigabyte has been pumping in info regarding its upcoming entry into micro notebooks market and the M912 is a part of the show. The M912 is a bit different from the rest of the gang because adopts the convertible tablet form. The 8.9-inch LCD can be used as a traditional notebook or can be spun around to be used as a touchscreen. The system features1.6GHz Atom CPU and 1GB of memory but will carry an unusually large hard drive, ranging between 120GB and 250GB depending on the exact model.

The first version of the Gigabyte M912 mini note will come preloaded with Linux and build in a 1.3-megapixel webcam as well as Bluetooth and an SD card reader. Launch details are not yet known, but the system is likely to be priced above $500.
Source