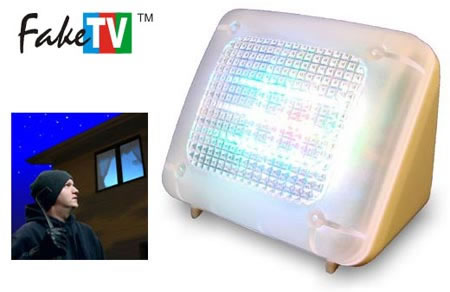 Get Fake TV to ward off thieves

Do a Kevin (Home Alone 1) on your neighborhood crooks and install a FakeTV to give the impression that you’re home while in reality you are out gallivanting with your friends. Come to think of it, it could also be used as a devious ploy to give the impression to your suspecting wife that you are home catching the game, while you actually are in bed with your mistress! On a serious note, FakeTV uses a built-in computer to control super-bright LEDs to produce light of varying intensity and color that replicate the motions of a real television. The light effects of real television programming — scene changes, camera pans, fades, flicks, swells, on-screen motion, and more, are all simulated by FakeTV.