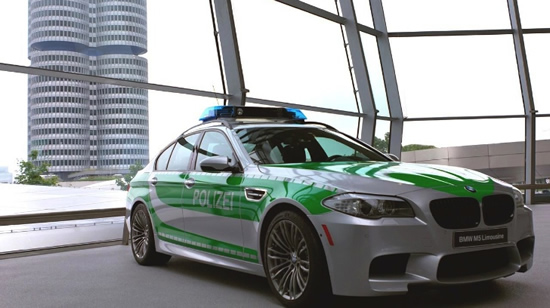 If you’ve been planning a bank heist in Germany lately, we suggest you use an asphalt-burner for a getaway car. You certainly wouldn’t want to pack your loot in a run-down van and be fish-tailed by this beastly police car after all. Unveiled at the Welt Museum in Munich, Germany, this jaw-dropping F10 BMW M5 Police Car is faster than those conventional wailers you usually leave behind in the dust and packs 560hp and 680 Nm (502 lb-ft) of torque. With enough power and muscle to catch up to the most heavy-footed criminal, this F10 BMW M5 seems to sway more towards the US model of the car, sporting an MPH speedometer, a manual transmission and an unseen front-bumper. A cop car you’d rather pull up for than try running away from, this one will stick to the showcases for now and we haven’t heard of it officially joining the German justice league.