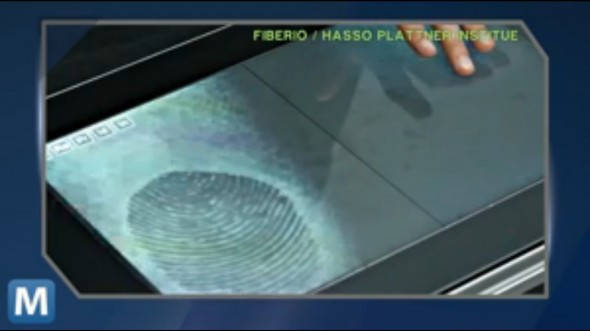 Touchscreen displays, in its current avatar, aren’t able to recognize or perform fingerprint scans and an additional sensor is needed for it. But, two German scientists have been able to solve this issue by integrating the two functions into one package which they call ‘Fiberio’. But, you may ask what’s so special about it? The display is capable of recognizing fingerprints up to FBI standards which is absolutely amazing. This technology has the capability of completely revolutionizing the way we interact with computers. With the capability of recognizing each individual fingerprint, it’ll enable people to access their private data and content from anywhere. The need of towing hefty laptops will be spared.

The system has a projector which projects images on to the screen from below. An infrared light which is placed next to the projector helps Fiberio recognize fingerprints. The duo is trying to improve the system by eliminating the projector which will make it leaner and lighter. They are also trying to perfect the design and software to make it more user-friendly.