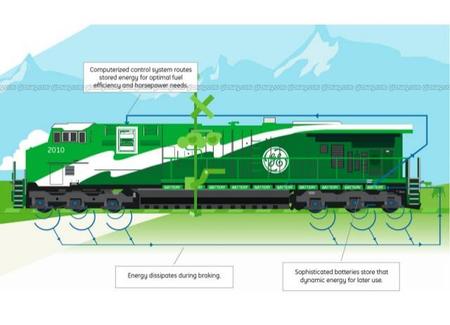 When highways are clogged and fuel reserves are strained, a machine that moves goods by dozens of thousands of tons represents a miracle technology that arrives not a moment too soon. Trains are the cleanest way to move massive amounts of freight long distances. In 2005 General Electric, cut fuel consumption by 5% and emissions by 40% compared to locomotives built just a year earlier with its Evolution diesel engines locomotives. GE will soon display its Evolution Hybrid locomotive prototype at the RSI Railway Technology Exhibition. Following the success of the Evolution Series locomotive, GE Transportation began development of the Evolution Hybrid prototype. The Hybrid features an innovative power-storing device that captures the energy that is dissipated in braking a 207-ton locomotive. The device then uses the energy to generate a 2,000 horsepower boost, which provides a fuel savings of 15 percent and an emissions reduction of 50 percent compared to pre- Evolution Series locomotives.

The Evolution system uses lead-free rechargeable batteries and is computer controlled in order to balance fuel efficiency and horsepower needs. The on-demand boost system also enables the locomotive to operate more efficiently in higher altitudes and up steep inclines. The battery modules are environmentally sealed, thermally insulated, air-cooled, and operate at 300°C. RSI Railway Technology Exhibition is the largest rail trade show in North America attracting leading manufacturers and suppliers from around the world.
Via – Greenlaunches