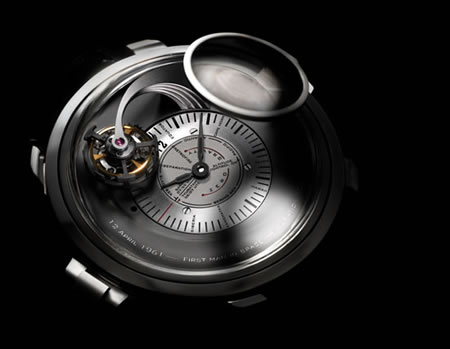 Fifty years ago the world was in awe of Yuri Gagarin when he managed to make a journey to outer space. To commemorate this success and as a tribute to the great cosmonaut, a high-end luxury watch called the Gagarin Tourbillon has been unveiled. The unique feature of this watch is that its tourbillon, the mechanical movement of a watch that is difficult and very costly to create, doesn’t stay in one place, but ‘orbits’ around the watch dial. The dial bears names of places and cities that Yuri has spanned over while in his Vostok-1 spacecraft in 1961.

The tourbillon also takes exactly 108 minutes to complete each revolution around the watch face – the time that Yuri stayed in orbit around the earth. There are only 50 pieces of this great timepiece available and comes with a high-grade platinum 950 casing.
Via – [Luxurylaunches]