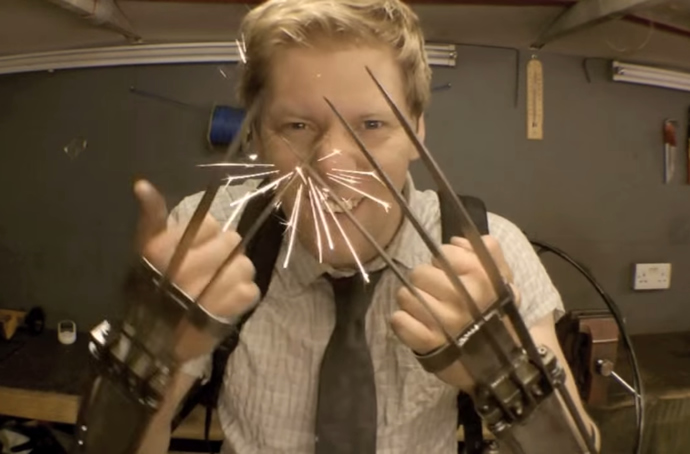 Want to put together the most awesome Halloween costume for this year? Then this one’s definitely for you! Search online for Wolverine costumes and all you’ll find are plastic claws that remain static and painted silver, and in all probability will make you look like a wuss. A crazy British inventor named Colin Furze has come up with a jaw dropping Wolverine claws that retracts like the real deal. And take my word for it, there’s no better movie prop I have seen for quite a while now. The replica but fully functional Wolverine claws made by Colin is extended and retracted using compressed air supplied by a tank worn on the users back.

He fabricated the claws using three 12-inch blades (each are two millimeters thick) which are operated toggle switches. Colin explains: “The first ever fully automatic wolverine claws that deploy AND retract automatically. These beautiful 12″ stainless steel claws fire out at the touch of a button and bring me as close as anyone has to feeling like they have adamantium claws. I think these are best on the net so hope you like em.” The Wolverine claws can been seen in action is the video uploaded by him which might look a little daft and un-Wolverine-like, but he chops down a few cardboard sheets and a melon which at least looks pretty cool.