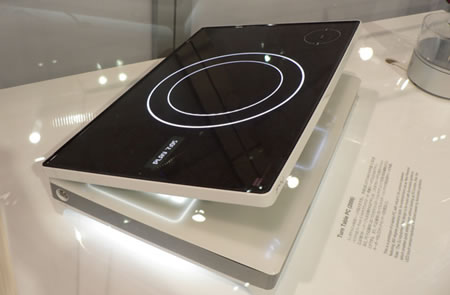 At Ceatec tech fair Tokyo Fujitsu exhibited the Turn Table PC which looks like a Macbook from the year 2015. It is by far the sexiest laptop we have ever seen, the keyboard and trackpad have a cool white glow around them. It comes with virtual 5.1 channel surround sound and the front flip of the LCD has a design which depicts the DJ’s turntable which is like a huge iPod click wheel. It also has dedicated MP3 player controls and a tiny display which displays the track information on the front flip so you control the music player without opening up the notebook.
Update – Instead of a traditional keyboard it comes with a LED touch-sensitive keyboard and will be hitting stores in 2 years.

The Fujitsu Turn Table PC is still a concept but we will surely want it hitting stores.