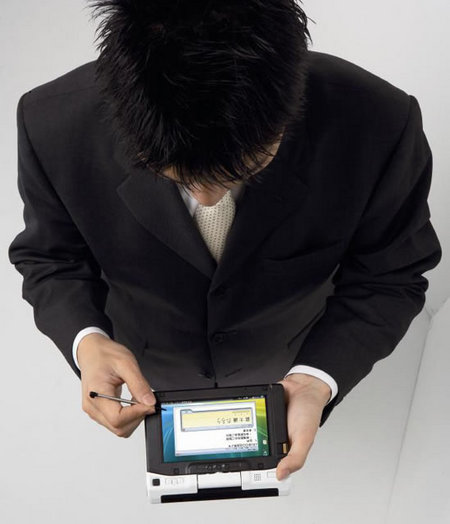 Fujitsu Japan has announced the super compact Lifebook U lappie which rightfully earns the title of ‘the world’s smallest and lightest notebook’. With a footprint of 171×133×26.5 – 32mm only it weighs a mere 580 grams. It is powered by Intel A110 processor at 800Mhz and Intel 945GU Express chipset which has an onboard graphics processor. Specs include Wi-Fi, Ethernet, Fingerprint sensor, 1 x USB 2.0 port, CF and SD card slot, Ethernet and VGA out. The Lifebook U runs on Windows XP Professional or VIsta Business. Watching movies wont be fun on the 5.6 inch (1024 x 600) display but you can surely send emails and make the cost sheet. The LCD doubles as a touch screen and can be rotated and twisted.

The onboard Lithium Ion battery has enough juice for 4 hours of Windows XP or 3.5 hours of Vista Professional, of course you can get the optional battery for extended computing hours. A base configuration with 512MB RAM and 20GB hard drive will cost around 151,200 Yen ($ 1255). Exact pricing and availability is not known yet, however it will be hitting Japan first.