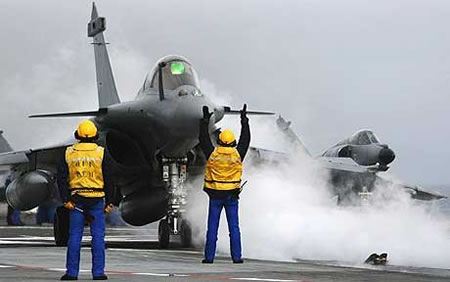 The French Navy faced the wraith of a virus attack on their newly upgraded Microsoft computer systems. The French naval staff was instructed not to operate their workstations due to a virus attack that occurred despite warnings sent by Microsoft three months in advance. Microsoft had identified the Conficker virus and had advised users from October last year to update their security patches. The virus did not allow the flight plans to be uploaded on the fighter jet practically stalling them in place till the conflict was resolved by using an isolated terminal.

They cut the communication links that could have transmitted the virus and 99 per cent of the network is safe now. The source of the infection could be by use of a USB pen drive used by some individual from within the base and is not suspected to be an outside attack.
[Telegraph]