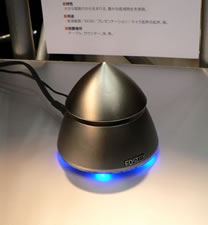 Fostex Company has prototyped a vibration speaker system that uses, instead of diaphragms, a tabletop and such, on which it is placed, to render sound. The company aims to launch it onto the market in the first half of 2006. The cone-shaped speaker system is 95 mm in diameter and 90 mm high. It features an actuator using a super magnetostrictor that extends and shrinks in line with magnetic field changes. The actuator converts input sound into vibration and conveys it to the tabletop so it renders sound. To ensure the conveyance of vibration, the system itself is made as heavy as 1.8 kg. TDK Corp. developed the super magnetostrictor used in this prototype.

Excluding some materials including glass and concrete, this system can use any material as an audio speaker. Since sound is heard from a whole tabletop with the system on, it gives listeners a strange feeling that it is “unable to specify where the sound comes from.” Making the most of such a property, Fostex will initially targets “BGM speakers for personal use” (Junichi Kondo, Sales Department, Fostex) as the key application, planning to commercialize the system within the first six months of 2006. The company also considers broadening the application to BGM speakers for business use at street shops.
Via – Techon